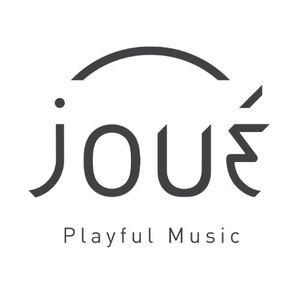 Our vision: Music is not a luxury, it’s a fundamental art which needs to be achievable for everyone.

We ARE a team of musicians fond of technology. We CREATE expressive and modular instruments simplifying music creation. We BLUR the line ...

between the analogical word and the digital world. We SELECT the best materials for a unique feeling of touch. We BELIEVE in evolving and sustainable process. We REDEFINE music creation. We ARE Joué.

Joué designs digital instruments for musicians who are looking for more intuitiveness, interaction, modularity and mobility in their playing.

Joué products are smart, simple, durable, evolutionary and pleasant to use. Our products offer artists an unprecedented level of expression in digital music creation.

Joué attaches a huge importance to the quality of materials, textures and design of its products. Whether you are an expert digital musician or blocked by the complexity of the art, Joué is pioneering ways to liberate your creative instinct.

Pascal Joguet Co-Founder and CEO A musician as well as an inventor and entrepreneur, Pascal received a masters in audio engineering and worked at France’s preeminent audio innovation center, IRCAM. He founded his first company Jazz Mutant in 2004 and developed his first musical product, the now legendary multi-touch Lemur controller. In the years that followed, he strengthened his expertise in startup management, business development, and innovative product industrialization before founding Joué. Pascal is a dedicated nature lover and humanist, and is passionate about putting human well being first in economic decisions, while respecting nature and the environment.

As Chief Business Officer, Stéphane is responsible for the company’s retail strategy, as well as pursuing partnership opportunities in the music industry and within the broader ecosystem. He has held a range of high-level positions, from sales and marketing to product management and business development, across a variety of industry-leading technology companies as well as emerging startups based in the San Francisco Bay area.

Prior to joining Joué, Stéphane was Chief Product Officer at Kanopy, an award-winning video streaming service providing access to more than 30,000 independent and documentary films. Previously, he was at Thomson Video Networks (now Harmonic) as VP Strategy and Business Development. He holds a MS CS from University of Nantes and MBA from Santa Clara University, Leavey School of Business.

A musician and inspired designer, Arnaud spent the past 20 years designing hardware products for both big names in the electronics industry and startups spanning the telecom, media, and audio realms. Today, he brings his global expertise in hardware development to Joué, generating wild new ideas and transforming them into simple, innovative, and playful instruments.

Arnaud is convinced that creating sustainable and eco-friendly digital products is possible, and Joué is the proof.

His passion for technology led him to create a 3D animation and special effects studio in the 90’s, working with companies like Saban Entertainment and Fox, including 100+ video game, film and TV titles for Fox Interactive and Vivendi Universal. As a consultant, Arabian has advised many companies on bridging the gap between technology and the youth, while bringing new product innovations to market. Along with his work with Joué, he is currently working with his tech partners to bring Open Labs to communities across the country to empower people of all walks of life to explore the future of technology.